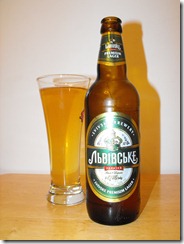 Saint Cyril died in 869.  He is credited, probably erroneously, with the invention of the Glagolitic alphabet.  A bit later, a new Slavic alphabet was developed in Bulgaria and named in his honour.  That Slavic alphabet is today used to spell this beer’s name.  The name of this beer roughly becomes “L-vivs-ke”.  Hyphens show where the soft sign “Ь” sits and doesn’t really do much except make the word harder to spell.  The different spellings of “Lvivske beer” and “Lvivska brewery” are because “beer” is neuter and “brewery” is feminine.  When the brewery was founded in 1715, Lwów was a Polish city.  Not long after, Austria annexed a big part of Poland including this city, known as Lemberg in German.  It eventually reverted to Poland and the Polish name after the First World War.  Then the city became part of the Soviet Union after the Second World War, finally renamed Lviv, and all the Poles were kicked out.  The beer I’m drinking is Ukrainian…well, it is now.  It’s a fine example of an Eastern European lager, although if you take the time to consult a map of Europe you’ll see that this city in western Europe is pretty centrally located.  From here, we always talk about east and west forgetting that there is a middle.

This entry was posted in Lager, Ukraine. Bookmark the permalink.