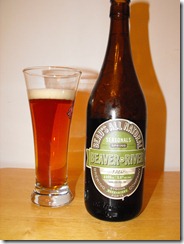 Today is the 100th day of the year, so (without counting) this is my 100th beer of 2011.  I decided on a nice Sunday drive out to the Beau’s Brewery about an hour east of here.  “Beau” is short for the Beauchesne family that founded the brewery.  There you’ll find their signature and seasonal beer in either 600 ml bottles or 1.89 L glass jugs.  This is the spring seasonal, a pale ale named after the translation of the one Castor River, not after any one of the 17 rivers in Canada actually named Beaver River or the four Rivière du castors.  Yes, I can have fun for hours querying the Geographical Names of Canada, but let’s drink a beer instead.  The dark copper colour tells you that they’ve used the malts of a British-style pale ale, but taste it and you’ll find there’s more hop than a bunny convention.  The hops are added after the boil, called “dry hop”, which increases the hop punch but not the bitterness.  I like it.  Kind of makes me want to drink 265 more beers this year.

This entry was posted in Canada, India Pale Ale. Bookmark the permalink.